“Sticks and stones may break my bones, but names will never hurt me.”

Did you ever hear this saying when you were young (or younger should I say)? 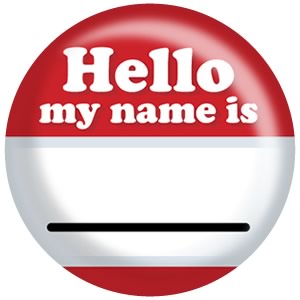 What you call someone impacts the “feel” of your approach, the perceived level of respect you have for them, and will potentially ignite some type of emotion for them.

Let’s use the name Jonathan as an example. The name is Jonathan Kreuser. Do you immediately call or write a note addressing him as Jon? Mr. Kreuser? John? Jonny?

Your personal comfort about own name doesn’t matter as much as what THEY prefer! It’s all about Them in sales, you know.

So what do you do to make sure your name-calling doesn’t hurt  your rapport or the conversation?

These are GREAT conversation starters and rapport builders.

I use the topic of the person’s name to my advantage! I have a practice of asking people what they want to be called, and often hear “It doesn’t really matter, whatever you want.” And I push the issue and respond, “Okay. I’d prefer calling you what you want.” then to keep it light I add, “I’m from a big family, our name was the thing we owned, what do you want to be called?” And more often than not I will get their real preference.

I also don’t make pre-printed name cards for training sessions. One of our first activities is the person making their own – and I say “Write the name you want to be called on your card.” It’s fascinating what I see – nicknames, initials, still an occasional Mr. or Ms., and variations of names I would’ve never thought of! It’s a great way to get the group seeing this is about them.

And a few additional tips on names:

Your name calling does matter – and though it won’t break someone’s bones (as the saying says) – it might break your opportunity.

Now what about you? What have you noticed about names?

P.S. If you need to address me, my name is pronounced, Nancy Bleeke (blay-key)  I REALLY don’t like to be called Nance.

And yes, Jonathan Farrington, our morning email exchange did make it into a blog post 🙂  I’m aiming to be a world class blogger just like you and Jill Konrath! And now I know that some people call the austere Jonathan, Jono!