Failure. Not a word sales professionals like to consider.  We strive for success, which is great.  Yet, failure may just be what we need sometimes.  It’s all in how we define what failure is.

What?  Yes, failure can be a good thing.  We all need to fail so we can learn and succeed at higher levels.

Yesterday our oldest son graduated high school.  The valedictorian of his class gave one of the most eloquent speeches I have heard in a long time.  Ryan laid out examples of people that had failed.  They learned from their failure, dug deeper into their beliefs and skills and emerged HUGE successes.  The Beatles, Walt Disney, Abraham Lincoln and  Thomas Edison are considered successes today.  But that wasn’t always true.

So what is failure?  Opportunity! 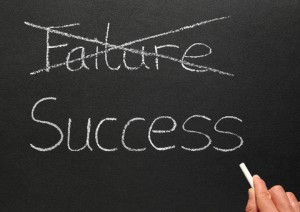 Opportunity 1:  Learning.  Step outside the emotions of a failure to diagnose what really happened.  Was it our actions?  Our lack of information?  Not having the right people on board?  Diagnosing what happened and then laying out a plan to not allow that to happen again is valuable.

Example: A sales rep worked for months on a prospective buyer.  He nurtured the relationship, put together proposals, sent small gifts and made ongoing calls. When he was told that the business went to a competitor he called and asked for time to learn the reasons he wasn’t selected.  What he found was that he did many things right, but that the solution he offered wasn’t  perceived to offer as much value as his competitor.  His competitor had done more research about the company, other decision  makers and such and they offered more as far as perceived value.

Wow, that was tough.  But he is successful and decided to learn from it.  He now does a different type of prep and research for his large deals and won’t be caught in that situation because of his own lack of information.

Opportunity 2:  A change of paradigm.  A failure can allow us to look at something (even ourselves) differently.  This change in our perception leaves opportunity for a different path.

Example:  3Ms Post-It products were never a goal.  They are the result of taking an adhesive failure and finding a different paradigm for that product.  thank goodness the R&D did not discard their failure. I don’t know what I would do without those products!

Opportunity 3:  New Relationships.  Failure can lead us to people that we would never have been exposed to if we had succeeded first.

Example: Years ago I was associated with a business person who didn’t share the same values.  The break was tough but it allowed me more time and energy to focus on how I wanted to build my firm.  The benefit? I found Lynn Zimmer who has been a blessing in so many ways to the Sales Pro Insider, Inc.  I would have never been open to working with her if the other relationships hadn’t “failed”.

What is failure?  Opportunity to diagnose, change, find new ways to get things done, explore, and learn.

There is a story about the young MBA marketing professional from Michigan.  He was assigned an important million dollar project early in his career.  The outcome was a failure.

He was summoned to the President’s office (sure he was getting fired).  After diagnosing what went wrong, what would be done so it doesn’t happen in the future and admitting his errors.  He stated, “I understand I will lose my job over this.”

The President’s response?  “Fire you?  Son, I just invested a million dollars in your education, I need you to stay and succeed.”

I wonder, if you haven’t failed at anything in a while, are you risking and pushing the limits enough?  Maybe not.