“Sticks and stones may break my bones, but “NO” can never hurt me!”  What a powerful quote from the Go For No book by Richard Fenton and Andrea Waltz.

Andrea gave me the Go For No book last week at the Sales Shebang in Chicago.  It is a ‘short’ book that I read early Saturday morning as I sat on the patio enjoying the fantastic end-of-summer weather in Wisconsin. 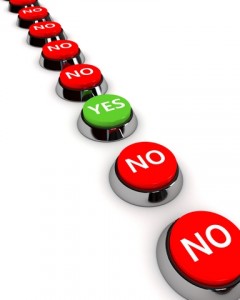 Go For No is a story about Eric James Bratton (fictional) who discovers that his success increases exponentially with the number of Nos that he seeks each day.  Eric  finds that if “Yes is the destination, No is how you get there.”  The philosophy is that persistence pays off.  And most of us give up WAY too early – like after we hear No once, twice, or even three times!

Fenton and Waltz’ message is that we need to embrace failure (if we consider hearing “No” a failure).  They outline the Five Failure Levels and the number of people that stop there – meaning if we keep going we differentiate ourselves and will find more success at the end!

What are these Failure Levels?

Sounds crazy to ‘want’ to fail – but reading the book reminded me of a story I heard many years ago from a trainer.

Bob was a couple of years out of college working for a manufacturing company in Detroit. He had impressed management enough to be given the lead in a million dollar project.  He was so excited and spent 10 months executing the project…which failed quickly.

Bob was summoned to the President’s office. With his head low, Bob entered the office with his ‘data’.  The President had many questions for Bob on How, Why and What. Then he asked ‘What would you do different?” Bob had some thoughts on that.

The President thoughtfully listened to Bob and then excused him. Bob was confused and said, “So, do you want to me clean out my desk today?” The President said “Why would I want you to clean out your desk?”

Bob replied, “Aren’t I fired for wasting the time and money on this project?”

The President chuckled and said “Fire you? Are you kidding? Son, I’ve just invested a million dollars in your education! I need to see a return on that investment.”

Wouldn’t it be great to work for THAT President?  Well, even if we don’t when take on the Go For No philosophy we have permission to TRY – and if it doesn’t work, that is more than OKAY – we are now closer to success.

I ‘grew up’ in the banking industry. Going for No was NOT okay with the President I worked for. We were careful…very careful….too careful! And unbelievable ideas and successes were missed. I learned a lot – and grew a lot but was also stifled.

After years I made a change…to the opposite end of the spectrum!  President Peter Reynolds at BRIO Toys (he now owns the Little Little Little Toy company) changed my possibilities. Peter was open to new ideas…and letting people try ALL kinds of things. That is where I learned how much I love sales – and the people who sell!  Without the permission to try things and possibly fail…I surely wouldn’t be in the career of selling and helping others sell better!

I highly recommend you get a Go For No book – and the resources that come with it for yourself- and your team if you have one.  Don’t just read it once – read it again – digest the message. Determine how you can approach what you do with the Go For No attitude.

This week I am challenging myself to hear ‘no’ more often. Its a great week to put this into practice – with a focus on business development at work and transitioning  3 teens back into school – the Go For No mindset might just allow me to feel like a winner by the end of the week!

p.s. This is not a sponsored recommendation – I receive no monetary gain from recommending this book – its just THAT powerful.

p.s.s. I just returned from a local parade. I told the folks around me I was Going for No for all the freebies being tossed out. they couldn’t believe what I received! A Frisbee, water bottle, tons of candy, certificates from local stores, temporary tattoes, a bead necklace (not like at Mardi Gras 🙂 and refreshing squirts of water.  Yes it was a  little silly ‘test’ with great reesults.  My ‘loot’ was more than double anyone around me (And I paid it forward and gave kids most of the goodies I collected too. I wanted to keep the water bottle…)