Do you know the  story of David and Goliath?  David was the underdog – the small teen who agreed to take on the mighty ‘giant’, Goliath, for the greater good of his people.  The story ends with David using his brains to beat the giant.

David’s will – or desire, commitment and focus – helped him win over the mighty skill – size, intimidation factor, reputation and strength – of Goliath.

Why a David and Goliath story in a sales blog?  Well, many of my sales ‘ahas’ come from life outside of work. This latest tip comes from observing interesting human dynamics during the state basketball championship for the Lutheran church basketball league in Wisconsin.

All season, the Goliaths of SE Wisconsin intimidated all other teams with their size, forcefulness and ‘plays’ – all called by their coach from the sidelines. They showed great skill all season long.

During the first games of the state tournament they continued their domination – and never let up  on their opponents – even when they were up by 40+ points with seconds to go.

The crowds did not appreciate the total annihilation…they wanted Goliath beaten!  In the semi-finals games, the crowd vocally started slaying Goliath and worked on breaking their will.  How? They cheered wildly for the underdogs.  This confused the Goliaths at the time.  And yet they won by more than 40.

The following day was the championship game. The giants were facing the ‘Davids’ – a team with a good, but not great record – full of a mis-match of players in size, skill and backgrounds.  The ‘Davids’ put on a brave face, vowed to ‘fight’ for the win and were supported by a crowd who WILLed them to win.  They fought hard, they used their skill to the best of their ability and with 6 minutes left in the game were still down by 19.  Victory did not seem possible.  And then….

The crowd cheered and encouraged and believed they COULD…and the WILL to win returned.

We watched in awe as the players drove hard, made unbelievable plays and showed they would not be beat. The Goliaths were confused by this burst of skill and will at the end of the game and eventually slunk away speechless as they were BEATEN by the smaller ‘David” team with seconds to go.

The field house exploded with energy and jubilation. The giant had been defeated.

Doesn’t it feel like that some days in sales? That the  ‘giants’ of the world are too much for us to win against? That all our skills are not leading to the success we thought should be ours?

Well, those are the days we need to find our will. We need to pull energy from all our sources to continue to make those calls, match our solutions to needs and ask for the decision!  In the long run, skill and will WIN in all aspects of life! 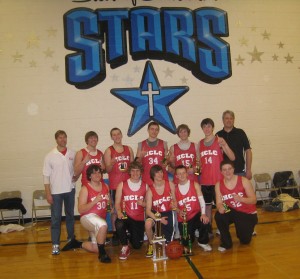 p.s. My 18 year old son was one of the “Davids’ in the basketball story. I can’t tell you how proud we are of this Hales Corners Lutheran team. They have shown us all that is okay to have FUN and still be winners. They have played basketball together for many years – and pulled it together, stayed focused and beat the big, bad Giants in their final-ever game as a team.  And proud for our Jackson, who put all the will he had into a game that has not always been his strong suit, to be named Tournament MVP 🙂  He’s #14 in the photo (my husband, Jon, is the coach in the white shirt).

Makes me more focused and thinking about my own will in certain situations recently. With more will, there are some giants I need to slay this week too.